Some of my most pleasant memories of my graduate school days at New York University in the late sixties were the lectures by Professor Robert W. Corrigan, then Dean of the School of the Arts, and an acknowledged drama educator, critic and writer.
He reminded me of Robert Redford: he had the looks, a beautiful wife and a lovely town house near the university where he held cocktail parties for his graduate students. And boy, did he know a lot about the theatre. He was the founder of The Tulane (University) Drama Review and edited anthologies of many books on drama, including The New Theatre of Europe, featuring Robert Bolt’s A Man for All Seasons, Michel de Ghelderode’s Pantagleize and Ugo Betti’s Corruption in the Palace of Justice. He also taught the plays of Bertolt Brecht, a book edited and translated by Eric Bentley, which my wife dragged down from the top shelf so I could read it before we saw the recent excellent Belvoir Street Theatre production of Mother Courage.
But there was another book that needed to be separated from its fellow tomes on the top shelf: Six Plays of Anton Chekhov, edited and translated by Robert Corrigan, with a wonderful introduction, including a foreword by the renowned director and long-time drama critic of The New Republic and The Nation, Harold Clurman. It was essential reading before seeing the Sydney Theatre Company’s production of The Present, Andrew Upton’s adaptation of Chekhov’s Platonov, his first full-length play, never published during his lifetime, but found in a Moscow bank vault, 16 years after his death. I never thought I could thank a Moscow bank for anything, but I do now.
Harold Clurman makes this point about the six plays – Ivanov, The Wood Demon, The Sea Gull, Uncle Vanya, The Three Sisters and The Cherry Orchard – “They are deeply affecting even as they provoke laughter; they make us smile even as we feel our hearts ready to break.” The Present, as adapted by Upton, certainly makes us smile – LOL, as they say on Twitter – and it also gives us insight into the Chekhovian view of life. As Corrigan puts it: “All of his life Chekov … despaired of the fact that he was unable to answer life’s important questions ‘Life,’ he said, ‘is an insoluble problem’.” But life goes on, and Corrigan continues: “Even though Chekhov knew there were no solutions, all his life he sought to find an answer, and his plays are a record of that quest … All of his plays are expressions of the proposition that ‘life is’.” Chekhov wrote this about what the theatre should be: “Life on the stage should be as it really is and the people, too, should be as they are and not stilted.”
The characters in The Present are not stilted. There is one scene (photo above by Lisa Tomasetti) where a 40th birthday party lunch fuelled by vodka turns into a no-holds-barred dancing on the tables which reminds me of some celebrations I have seen in real life (I have been a journalist for more than 40 years, after all!). Upton’s adaptation has plenty of real life in it, but it also has characters who make grand plans but do nothing about them. Robert Corrigan sums up this Chekhovian feature: “Like the characters in the novels of Kafka, Proust and Joyce, the people in Chekhov’s plays talk and plan a great deal, but they do nothing.” Local doctor Nikolai (Toby Schmitz) tells Anna (Cate Blanchett) what he thinks about life: “If I think about it too much, it starts to feel like something that’s already happened.” http://bit.ly/1N6JDfc
Mikhail, the local schoolteacher (Richard Roxburgh), has his eyes (and hands) on all the women around him, but life and ambitions have passed him by. Roxburgh and Blanchett sit on the same chair – the only one left after an explosion shatters the birthday party room – to ponder what they’re going to do with the rest of their lives. These two great actors carry it off beautifully, as they do throughout the play (photo below by Lisa Tomasetti). It’s Chekhov’s use of irony displayed best in another one of his plays, Uncle Vanya, when Yelena says to Sonya: “You mustn’t look at people that way. It isn’t right. You must trust and believe in people (pause) or life becomes impossible.” Yelena, of course, does not trust or believe in people. 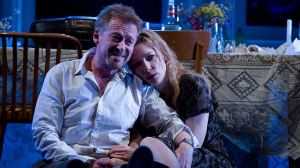 Andrew Upton has reset the play from pre-revolutionary Russia to the post-perestroika 1990s, allowing a more modern setting, with similar misgivings about Mother Russia. One critic, Ian Dickson in Australian Book Review, was scathing about Upton’s use of a rude word: “The modern setting allows Upton to indulge his obsession with the word ‘fuck’. I imagine in the not too distant future there will be a PhD thesis on ‘the use of the word fuck in the plays of Andrew Upton’. This is symptomatic of a script which relentlessly coarsens the piece and pushes it towards farce. This is exacerbated by John Crowley’s shallow production.” http://bit.ly/1PorM1D
A bit harsh, I say. It makes for a more lively production and more laughs. I think the audience had no trouble working out what was tragedy and comedy in the play, and it was certainly not a shallow production. And if Chekhov were still alive, he would have sat in on the rehearsals. Robert Corrigan writes: “He insisted on hearing his script read by the actors before making his final revisions, and he refused to have his plays published until he could incorporate the changes made in them during the rehearsal period.”
I thought The Present was thoroughly enjoyable from start to finish, and the audience reaction was overflowing with applause and bravos and three curtain calls. It was a matinee performance, full of elderly theatregoers who didn’t seem to mind four-letter words. The music transitions were nicely put together by composer Stefan Gregory, and designer Alice Babidge has done a splendid job with a sparse, but appropriate set, with lighting well handled by Nick Schlieper.
The ensemble cast was excellent, with particular kudos to Jacqueline McKenzie as Sophia, the wife of Sergei, Chris Ryan, who also deserves a bravo, but really all the actors contribute to a brilliant production. Chekhov, I think, would have liked it.
It’s a fine swansong to Cate Blanchett and Andrew Upton who are moving to the US when his term as artistic director of the Sydney Theatre Company ends this year.
And I’d like to thank Robert Corrigan, who died in 1993, for his lectures, his vision and, in particular, his superb introduction to the plays of Chekhov. The last words should go to Corrigan:
“There have been many playwrights in the modern theatre who were conscious of the doomed nature of human experience, but I know of none who accepted this fact and still had such trust in the enduring qualities of those ‘arduous eccentricities we are born to’ as did Anton Chekhov.”

“When you publish a book it’s the world’s book. The world edits it.”

Those were the words of Philip Roth who died last week at the age of 85. A great American novelist. My favorite Roth novel is Goodbye Columbus, though his best is probably American Pastoral. Stephen Romei chose the quote above in his blog: A Pair of Ragged Claws. I like this one from The Counterlife from his character Nathan Zuckerman (Roth used it as his opening quote in his 1988 autobiography,  The Facts):

— The Facts: A Novelist’s Autobiography

“People were playing dead and they were so scared — a great reason so many were killed was because so many people wouldn’t leave their friends. So many people put themselves in front of people.”
Eagles of Death Metal singer Jesse Hughes tells VICE News about the terror attack on their concert at the Bataclan in Paris. The courage of the concertgoers contrasts with the cowardice of the terrorists.
“I now understand in a profound way the agonies borne by so many others in these islands, of whatever faith, denomination or political tradition.”
Prince Charles speaking on a pilgrimage to Mullaghmore, Ireland where 36 years ago his much-loved, great-uncle, Lord Mountbatten was murdered by the IRA. The murder had helped him understand the pain suffered by the people of Northern Ireland during the Troubles.
“I was born with a reading list I will never finish.”
Maud Casey, novelist, Associate Professor of English and teacher of creative writing at University of Maryland, quoted at the beginning of a BuzzFeed story on Trove. My sentiments exactly!
“And to Luke, my little man, you will not die in vain and will not be forgotten. You are the reason I have found my voice and am able to be here. You are beside me on this journey and with me every step of the way … there remains a serious epidemic across our nation. No matter where you live, family violence exists in every pocket of every neighbourhood.”
Rosie Batty, named 2015 Australian of the Year, dedicating her award to her 11-year-old son Luke, killed last year by his father.
“I see Laurie Oakes had a scoop the other day posited on my dying. It will happen sometime, but as you know, I plan for the ages not just for this life.”
Gough Whitlam speaking at his 80th birthday party celebrations, expressing his belief that he had a few more years left.
“When someone asked him who would lead the party if he fell under a bus, Gough said that would be unlikely to happen with the improvements my government has initiated in urban transport.”
The Nine Network’s political editor, Laurie Oakes, remembering Gough Whitlam on the Today Show, adding: “I knew Gough well and liked him, and I’ll miss him.”
“He was a great parliamentarian, he was a great leader, he was a great Australian, and for so many of us, and this is what makes it so hard, he was a great friend and mentor.”
Senator John Faulkner, speaking to the members of the Labor Caucus, paying tribute to his friend and former Prime Minister, Gough Whitlam, who has died, aged 98.
“No hate in the world is as strong as the love we have for our children, for Mo, for Evvie, for Otis. No hate in the world is as strong as the love we have for Grandad Nick. No hate in the world is as strong as the love we have for each other. This is a revelation that gives us some comfort.”
An excerpt of “a message to the soldiers in the Ukraine, the politicians, the media, our friends and family,” from the Maslins, the Perth parents of the children, along with their grandfather, who were among those killed in the shooting down of Flight MH17.

A blog by an Australian writer who lived in New York, then came home.

I have people to kill, lives to ruin, plagues to bring, and worlds to destroy. I am not the Angel of Death. I'm a fiction writer.

I have a column and I'm not afraid to use it

A chronicle of Sharon's food adventures and travels

this is... The Neighborhood

the Story within the Story

Anything that's fit for print

the secretion of art by Rhian Ferrer

The Hotelier's Wife: An Expat Affair Around the Globe

The latest news on WordPress.com and the WordPress community.

Howdy! We're the largest independent bookstore in Texas. This is our blog.